I mentioned in a series of tweets that one of our beta readers has really gotten into the story: 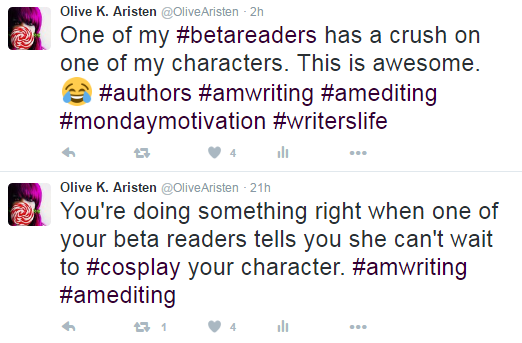 Giggling girlishly, so beyond happy and totally twitterpated, I typed up those tweets and went along my day, satisfied with a job well done. Sure, we have a lot of work to do on the story to make it shine (editor, rewrites), but I think every writer/author dreams of the day when their readers can fall in love with their characters just like they have. I see tweets about this all the time; there’s fan art, fan fiction, you name it. Our world is big enough for some badass fanfic, if I don’t say so myself.

Then the next morning, something completely hilarious happened. But let me start with a short story…

It begins with one of my beta readers who I’ll simply call “A”. Now A is one of my besties and closest friends, usually not who I would recommend seeking out for a beta reader. Most of the time, betas need to be able to deal with you at arm’s-length, without getting into the “I might hurt her feelings” area of critique. But A is an exception. A has no problem ever telling anybody what she thinks. With A, I can always count on an honest assessment, and know ahead of time that I’ll get it, whether I really wanted it or not.

A has an otherwise impressive resume, other than being one of my besties. A has a degree in English from a major university and is a voracious reader. She reads like fish drink. She is also a full-time doctoral candidate, who I was lucky enough to snag in between semesters. When I gave her  CHAINED, I won’t pretend like I wasn’t concerned for my own sanity following her reactions and critique. But then she told me that she could see herself cosplaying one of our main characters. I thought to myself, well, that’s quite inspiring. Then she told me she had a crush on one of my characters. Sweet, even better. If she likes him this much, probably others will too.

And then the next day, she sent me this message:

To sum this up, she was doing a briefing for one of her jobs over a Web application where many other people were online watching her, some of whom she could see. One of them was a certain man who reminded her of a certain character … And she thought he was pretty. 😀 ❤

A also has the vocabulary of a sailor, as you might have noticed. 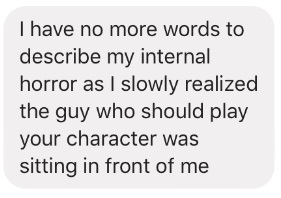 This whole writing thing is turning out to be fun for unexpected reasons. I feel like all that’s left for me to say is … You’re welcome. My work here is done. ❤