“I think there are two types of writers, the architects and the gardeners. The architects plan everything ahead of time, like an architect building a house. They know how many rooms are going to be in the house, what kind of roof they’re going to have, where the wires are going to run, what kind of plumbing there’s going to be. They have the whole thing designed and blueprinted out before they even nail the first board up. The gardeners dig a hole, drop in a seed and water it. They kind of know what seed it is, they know if planted a fantasy seed or mystery seed or whatever. But as the plant comes up and they water it, they don’t know how many branches it’s going to have, they find out as it grows. And I’m much more a gardener than an architect.” 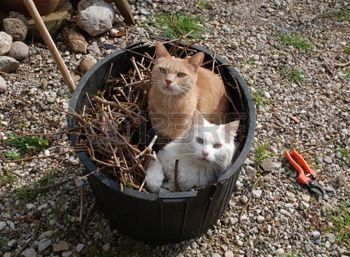 From lurking in forums and talking to other aspiring authors, it surprises me how much time people spend designing their world before they dive into it.

For me, the blank page is freedom. It’s looking into the void and grinning at the endless possibilities. But after that seed starts to grow, then you’re in the shit. Maybe it becomes a jungle around you, so dense you get lost in all the intricate foliage and insects stinging at your eyes, laying eggs under your skin. Or maybe it’s a pathetic collection of withering plants (kind of like what I have going on at my current apartment) that you are desperately trying to keep alive.

Anyway, for us, we just start to write and then the world begins to form as the characters move through it. Then one thing will spark an idea, and suddenly we have an entire nation with the intricacies of their culture, how others perceive them in the world, the history that makes them who they are. It’s very character-focused writing, with the world always kicking at them until we pay enough attention to it and figure out exactly why.

For “Olive Aristen,” and for myself in my own projects, we plan the greenhouse on a paper napkin, and then we build it after we know the plants are going to live through the winter. (Or at least live until I get a pretty photo of them and show my mother I don’t kill every plant she gives me.)

For Azura’s Chosen, the world wasn’t completely defined until we finished the rough draft for the second volume and started the third. (Which will probably turn into the 6th book in the series, if we’re so lucky to keep this up.) By then, we understood the mechanics and politics of the world so well that we could simulate an idea before we write it, and figure out how an event could be possible.

Confession: that’s when I start to slow down. The garden has become a house, and now there are rules and laws and a natural order to take into account. I don’t like having to clean up all the time, so I’m very careful about where things go. Do people from this country eat this type of food? Would this character talk this way or where those clothes?

You see how quickly you can get into the weeds. But that’s not to say it’s full of beautiful flowers, dying plants, vines full of flies (now seriously, how did they get there?) all that inspires you to move forward with and follow towards the sun.